These are 9 upgrades that improve on the factory Walther PPQ. Light and extended magazine options are here. The second from the last might surprise you.

I made an effort rank these upgrades in order of importance.

You can hit what you can’t see. These Streamlight light and laser combos are excellent additions to any pistol with a rail. I recommend green lasers over red lasers. According to the NRA, green lasers are more visible in bright sunlight(source). Some folks don’t like running lights because the light is a target. I strongly disagree with this logic. It’s worth giving that slight advantage to an enemy to see clearly who the bullets are going to hit.

These two lights are superb. They each have 3 modes: light only, laser only, and laser and light together. The on/off switch is ambidextrous. Using your shooting finger, the switch on both sides turns these lights on or off.

The TLR-2 throws most of it’s lumens through the center beam for long distance illumination. Around the center beam, a wide disbursed shot of light provides illumination for close distances. This makes the TLR-2 a light for many applications. The TLR-4 provides plenty of light for close distances applications including room clearing and urban self-defense.

These lights have a limited lifetime warranty which excludes batteries, bulbs, abuse and normal wear. Rechargeable batteries, chargers, switch, and electronics are warrantied at for 2 years. 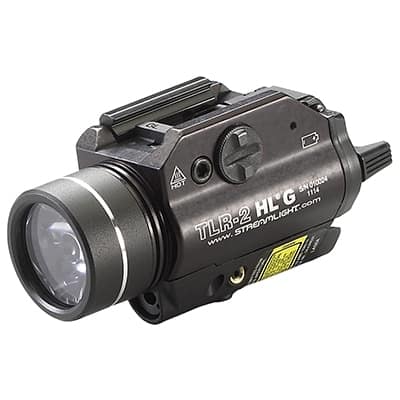 This is my favorite set of hearing protection. I bluetooth it to my phone and listen to music when I am shooting. The headband and ear cups are comfortable. I can wear this all day. The battery lasts several hours. It recharges with USB.

The NRR(Noise Reduction Rating) is 24. That’s a bit low for shooting. It’s best to use ear plugs and these ear muffs together for maximum hearing protection. If you want to put a compensator or suppressor on your PPQ, then the Jarvis Customs threaded barrel is a good buy. It’s “match grade” according Jarvis Customs with 4140 steel. That’s a popular metal for corrosion resistance and toughness.

It’s available for the full size PPQ and the sub-compact. The popular 1/2×28 thread option is available.

I found nothing saying this barrel is more accurate than factory Walther threaded barrel. The Walther PPQ is a good trigger from the factory. It’s widely considered one of the best stock triggers. Well, Apex asked someone to hold their beer and made a trigger kit for the PPQ.

The weight is not reduced which is understandable. The factory trigger comes at a respectable 5.5 pounds so it’s makes sense that Apex did not drop the weight.

It works for the M1, M2, and Q5 excluding the steel frame and steel frame pro, but will not work for the sub-compact PPQ. Taran Tactical Innovations makes an aluminum +3 / +5 base pad. It works with any full size PPQ magazine. It attaches and detaches with a push pin lock design.

Tired of aligning the front and rear sights? Trijicon’s RMR will solve this problem for you. I am being a bit sarcastic, but getting on target is faster with a RMR.

The RMR comes with legendary Trijicon reliability. RMRs are trusted by police and militaries the world over.

The battery requires removing the sight and re-zeroing. Trij says RMRs batteries last for more than 4 years of continuous use. You might want to replace the battery every year to be on the safe side.

I recommend the adjustable LED RMR. This version gives shooters full control over dot brightness. The dot is only available in red. There are 3 dot sizes available. In theory the larger the dot size the faster the eye alignment. I disagree with this logic. The RMR requires training regardless of the dot size and the small the dots size the more precise the shots.

Using the RMR does not turn a PPQ into a video game gun. You will still need to practice drawing the gun. It takes muscle memory to bring the dot to the eye every time. The PPQ is not offered with a threaded barrel. It should because the Osprey 45 looks great on any pistol.

Why did I choose the Osprey 45? It’s one of the quietest, I have one, and it has some great features.

The threads are on a removable piston. The allows the suppressor to fit on all common male thread sizes.

The unique tombstone shape makes the osprey sit lower than round suppressor when attached. This reduces the height a pistol’s sights need to rise above.