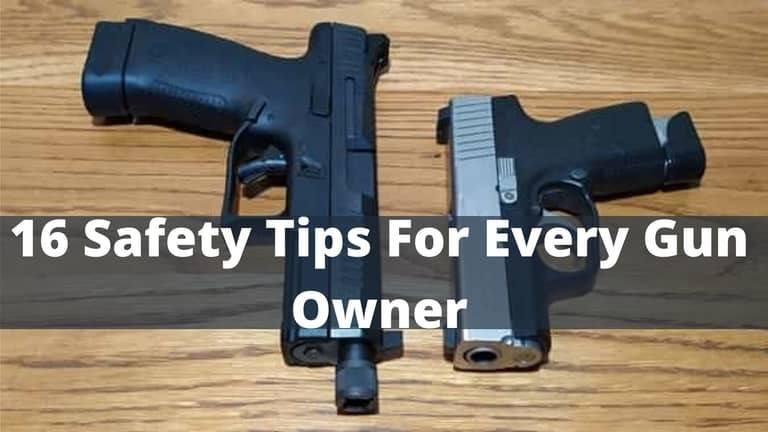 These 16 safety tips will keep you and those you love safe around firearms. Practicing these safety tips is even more important than practice shooting. Remember, you are responsible for every bullet you fire.

Watch the videos to learn even more about gun safety.

This the most important firearm safety rule. Always keep the muzzle pointed away from anything you don’t intend to destroy. If a gun is fired in a safe direction, then the only property and hearing will get damaged.

Be aware of what is around and behind your target. This is especially important for outdoor shooting. If your bullets will travel through trees, make sure nobody is among them. Even everyone you know is educated on your outdoor range, the neighborhood children might be playing in that area.

Bullets can ricochet off hard targets like rock and water. Ricochets cause bullets to travel in unexpected places. Bullets can skip on water just like thrown rocks. A bullet skipping on water for hundreds of feet might be in the path of boat, swimmer, or people near the shore.

Shooting in low light is generally unsafe. However, in a self-defense situation you might not have a choice. Use a flashlight to illuminate your surroundings.

Fingers Off The Trigger When Not Shooting

Treat All Guns As If They Are Loaded

In addition to the above, just expect any gun you have not inspected to be loaded. Even if you think you unloaded it in the recent past.

Should You Ever Look Down The Barrel Of A Gun?

There is rarely a good reason to look down a gun barrel from the muzzle. Sometimes this is necessary when looking for barrel obstructions. If you drop a gun in mud, dirt, or snow then you might need to do this. Also, a visual barrel inspection can be needed to look for excess gun cleaning agents.

How To Safely Look Down The Barrel Of A Firearm

Fully Unload Guns When You are Not Shooting

Unless it’s your carry or home defense gun, firearms should not be loaded when not in use. There simply is no good reason to leave a gun in a loaded state when not in use.

For semi-automatic guns with detachable magazine, do the following to properly unload a loaded gun.

How To Unload A Semi-Automatic Pistol

How to Handle a Failure to Extract Malfunction

If a case will not extract, then you have a firearm with a failure to extract malfunction. You need to visually inspect the chamber. The slide should be locked back exposing the action. If it is not, lock it back so the chamber can be visually inspected. Position the exposed action so you can see into the chamber. If there is a case in the chamber, you need to remove it. A knife or flat head screwdriver are good tools for this.

Remember to do all of the above with the gun pointed in a safe direction.

Do Not Leave Unlocked Firearms Around Children

Hiding is not enough. You should assume your hiding spot is known by everyone.

A $10 key or combination cable lock will work just fine. These locks stop rounds from entering the chamber and they prevent the action from closing. Make sure all keys or combinations are only available to adults.

Lastly, educate the children you live with about the danger of firearms and how to responsibility handle them. They can be educated on all 15 of these safety tips under the supervision of adults.

Be Sure The Barrel Is Clear Of Obstructions

Firearms are only made to handle so much pressure. A foreign object in the barrel will increase the pressure. It does not take much of a pressure increase to destroy a barrel. Do not shoot a firearm that might have a barrel obstruction. Exam the barrel with a cleaning rod and maybe a visual inspection before shooting again.

Leaving gun oil in the action or barrel will also increase the pressure. Swab out all the cleaning agent after you are done cleaning your firearm.

Hunters with shotguns or rifles must be especially careful. Snow, mud, and dirt can easily plug a barrel. Any firearm that is dropped in snow, mud, or dirt should be inspect for a barrel blockage.

Loading the wrong ammunition into a shotgun can also cause a barrel explosion. For example, loading a 20 gauge shotgun round into a 12 gauge shotgun. The 20 gauge will freely slide down the barrel. When a 12 gauge round is fired, the extra pressure caused by the 20 round can cause a barrel split. If you have different gauge shotguns, then pay close attention to the cartridges you load.

Blooper rounds are another source of barrel obstruction. When a shotgun cartridge is submerged, water gets inside it. Water can mix with the powder charge and primer mixer. A blooper round will usually fire. It will sound different than a dry cartridge. The water weakens the discharge, and the shotgun wad will likely be stuck in the barrel. Keep your shotgun rounds dry at all time. It one gets wet don’t use it.(source)

This Guy Destroys A Shotgun With Mud In The Barrel

Owning a car doesn’t make someone a good and safe driver. Likewise, owning a gun is not enough to be an effective and safe shooter. Practice shooting to develop the muscle memory you need to develop good habits.

You can learn about 10 highly effective pistol drill from this article I wrote. Check it out here.

Use Hearing And Eye Protection

Shooting guns without hearing protection WILL cause permanent hearing loss. No matter how uncomfortable the range ear muffs are, you should wear them.

You can get a comfortable set of earmuffs for less than $30.00. Eye plugs are also an effective option. They should be tightly compressed before inserting. Ear plugs should have just enough sticking out to allow for easy removal. Do not reuse ear plugs if they are labeled “disposable”.(source)

You also need eye protection. Most guns are designed to not shot ejected cases at a shooter’s face. However, the shooter to your left at the range might send cases at your face.

Most ammunition contains lead. Firearms shooting lead ammunition releases lead particles into the air. Shooters and people near shooting will absorb the lead firearms release. Lead is positively charged and the human body is negatively charged. As a result, lead will stick to shooters and get absorbed. Lead on a shooter can be transferred and absorbed by others.

If you shoot a lot or work in a shooting range, then you should take steps to reduce your lead exposure. Gloves, respirators, and de-leading clothing detergents will greatly reduce your body lead levels.

Learn more about the danger of lead from shooting and how to stop it, click  here.​

Don’t Rely On The Safety

Some firearms have external, manually flipped safeties. These prevent a firearm from firing when a trigger is pulled at the wrong time. It’s a good idea to require safety use for novice shooters.

Have said the above, don’t rely on them. Do not pull the trigger of a loaded gun even with the safety engaged. Also, an activated safety does not mean you can stop thinking about where the gun is pointed. Doing these things is placing too much trust in the safety. It’s not worth the risk.

Your concealed carry pistol is meant to be carried in public. By developing safe firearm habits, you are safer with a gun than without a gun. Remember why you have this self-defense tool. It’s to protect those you love and yourself. Carrying your pistol should be as automatic as wearing shoes.

If you don’t already have a carry pistol, then keep comfort in mind when shopping for one. You will not carry a pistol that is uncomfortable to carry or shoot.

When your self-defense pistol is with you, it should fully ready for use. It 100% safe for responsible gun owners to keep a round in the chamber. With good trigger disciple and muzzle control, your fully loaded pistol is in good hands.

Also, all modern firearms are drop safe. There is no chance of your loaded gun firing on it’s own.

Clean Your Guns After Use

Guns get dirty after use. This is known as fouling. Fouling will reduce the reliability of your gun. It can stop the action from closing. Also, a dirty gun might not feed or eject cases.

With quality, non-corrosive ammunition you do not need to clean immediately after shooting. You should clean it within a few days though. This is especially important for your self-defense firearms.

Remember to remove all cleaning agents from the chamber and barrel.

Sometimes ammunition malfunctions. A misfire occurs when a primer receives a light strike or when a primer totally fails to ignite the gunpowder. Misfires are not dangerous themselves. However, misfires can actually be hang fires.

Hang fires are very dangerous. A hang fire is when there is a noticeable delay between the primer strike and the ignition of the gunpowder. Hang fires can happen with old ammunition with deteriorated primers or gunpowder.

Hang fires become dangerous when they are treated like misfires. Assume any round with a struck primer is a hang fire. Do the following handle problem safely.(source)

How To Handle A Hang Fire Or Misfire Safely

Make And Use Hand Loaded Ammunition With Caution

The primary danger is firing a squib load. A squib load is a round with too little energy to fire the bullet out of the barrel. This results in the bullet being stuck in the barrel. The next round firing will likely destroy the barrel and cause an explosion.(source)

Squib loads usually result from using too little or no powder. Weighing every hand loaded round will show if a round is under weight and under powdered.

Use The Correct Ammunition

Always make sure you use the correct ammunition for your firearms. Loading the wrong ammunition can destroy your gun or worse. For example, loading a 5.56mm NATO round into a .223 Remington rifle will likely damage it. The case sizes are the same so 5.56mm NATO will fit in a .223 Remington chamber. However, 5.56mm has much higher pressure than .223. At best this will cause excessive wear. At worst, injury to the shooter.(source)

Watch This Video To Learn More About Gun Safety